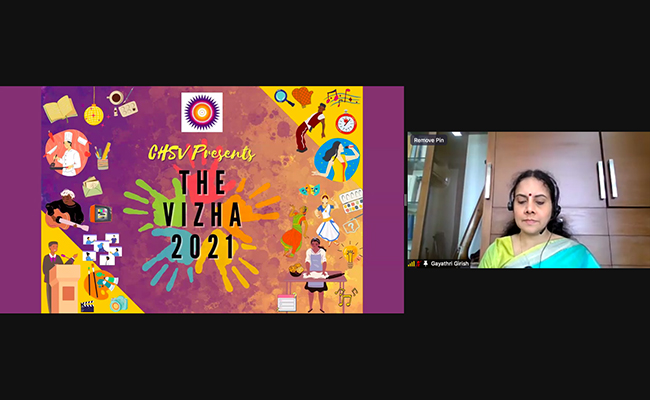 Chettinad Hari Shree Vidyalayam held its eighth annual cultural extravaganza – The Vizha 2021 (its second online edition), on the 6th and 7th of August. The event was organized efficiently by the 11th and 12th graders, under the guidance of a team of teachers. With a total of 12 events that took place through Zoom, and 9 through Google Classroom, an overwhelming amount of talent was showcased over these two days. Some of the online highlights were ‘Don’t let me drown (shipwreck)’, ‘Swim with the Sharks (shark tank)’ and ‘Jeopardy’ while the offline events included competitions like ‘Meme, Myself and I (meme making)’, ‘Get Set Reel (reel making)’, ‘MasterChef’ to mention a few. The Vizha was an enriching experience not only for its participants from other schools, but also for CHSV’s organizing team. We were honoured by the presence of singers Mr. Srinivas and Ms. Gayathri Girish who were the chief guests for the opening and closing ceremonies, respectively. This year’s Vizha had nearly 200 participants from various schools across Tamil Nadu, and Mumbai. The Vizha team made its mark with the cutting-edge technology used to ensure safe and secure, yet easily accessible Zoom meetings. Overall, the event was a huge success, all thanks to effort put in by the students and acharyas.